Documents
DOCUMENT
» ABOUT US » Background » History

Beginning in 1991, as the Centre of Mariculture Studies (COMAS), the International Institute of Aquaculture and Aquatic science (I-AQUAS) UPM has a long unique history spanning a period of almost three decades. COMAS was established in 1991 under the Faculty of Fisheries and Marine Science, and began to operate officially in 1993.The centre was originally established for research in different aspects of Marine Science of the Straits of Malacca. After the Faculty of Fisheries and Marine Science moved to Terengganu in 1996, COMAS had undergone several changes in administration, including change of name to the Marine Science Centre, which was initially under the administration of the Faculty of Science and Environmental studies, but then later was supervised by the Office of the Vice Chancellor (Research and innovation), UPM.

The Marine Science Centre continued to work in various studies based on aquaculture and fisheries, as well as aspired to become an excellent research centre in marine, aquaculture and natural conservation. In December 2017, once again the Marine Science Centre created history when it was upgraded into an international institute, that is the International Institute of Aquaculture and Aquatic science (I-AQUAS).The establishment of I-AQUAS was based on its objective to provide a new research platform based on local and international elements in aquaculture and aquatic science, and thus making UPM a centre of excellence in current technology research and development in the field of aquatic ecosystem and natural resources.

Close linkages between I-AQUAS with other research centres/institutions from all over the world have opened a wide range of opportunities to collaborate on various aspects of research and innovation in aquaculture and aquainformatics. Vast networking and linkages have enabled I-AQUAS to develop as a global research institute in line with UPM's vision to become a reputable international university. 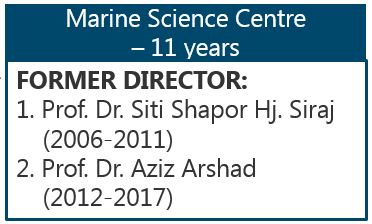