More than 3.2 billion people depend on fish for their animal protein as the world fish consumption increased from 9 kg per capita in 1961 to approximately 20.3 kg per capita in 2020 (FAO, 2020). The increase in consumption was not only due to the increased production, but also by a combination of factors related to population growth, rising income, nutraceutical and health benefits, improved availability, urbanization and change in life styles. In Malaysia per capita consumption is one of the world’s highest at about 59 kg in 2016. Unlike other agriculture sector, fisheries sector with more than 100 commercially important and cultured species from over 32,000 fish species known today, offers high choices of species and products. As a food, fish forms an excellent source of protein, vitamins, minerals and antioxidants which are great resources for nutraceutical, cosmeceutical and pharmaceutical industries. Fish is also known as a brain food due to its high polyunsaturated fatty acid contents, especially omega-3 fatty acids are related to brain functions, health and memory. Thus, the fisheries industry is a key food producing sector and plays a significant role in ensuring food security and human nutrition of the country.

Like in many places in the world, capture fisheries production in Malaysia is stagnating or even declining due to anthropogenic activities related to overfishing, pollution and habitat deterioration. In 2017, total fishery production in Malaysia amounted to 1.7 million tonnes, of which 1.5 million tonnes (88.2%) came from the capture fishery and 0.2 million tonnes (11.8%) from aquaculture, excluding seaweeds (FAO, 2019). Malaysia is a net importer of fish and fishery products (ranked 26th in the world) amounting to USD976.6 million in 2017 (FAO 2019), while total export earnings were USD 714.1 million in the same year (ranked 42nd in the world). 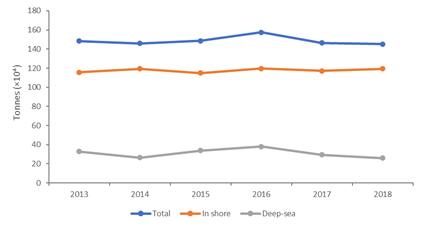 Blessed with myriads of aquatic resources in the country such as highly productive mangroves, estuaries, seas grasses, and coral reefs in the coastal areas, can we reverse this trend? Can fisheries sector provide food security for the nation? Can we ever dream of becoming self-sufficient? In 2014, WorldFish, USAID and the Government of Bangladesh initiated an enhanced coastal fisheries project (ECOFISF-BD) using an ecosystem approach through research-led management initiatives focusing on its national fish Hilsa shad (Tenualosa ilisha). Only after two years, the average size of caught fish increased from 510 g in 2014 to 880 g in 2016, and fishers’ income increased by 52% (see the ECOFISH-BD article in this same issue). The shads, Tenualosa spp. (terubuk), have complex life cycles requiring the sea, estuary and river to complete their migratory patterns, and thus are vulnerable to environmental pressures. It was narrated that Hilsa was once abundant in the Straits of Malacca, but has not been found or reported for decades. In Malaysia, two Tenualosa spp (terubuk), T. toli and T. macrura, can still be found in Sarawak waters, and are also under serious threat due to pollution and overfishing. Effective management through ecological-based ecosystem approach is needed to ensure the sustainability of this valuable natural heritage.

In Malaysia, to be sustainable, the fisheries industry has to focus on its production system, as the whole value chain of the sector finally depends on the biodiversity, health and resilience of the ecosystem. In Malaysia, the highest fish landing was from the Straits of Malacca.  Was it just a coincidence that Perak produced the highest yield compared to other states in the Straits of Malacca? Or because Perak has the highest density of mangroves lining its coast compared to others. 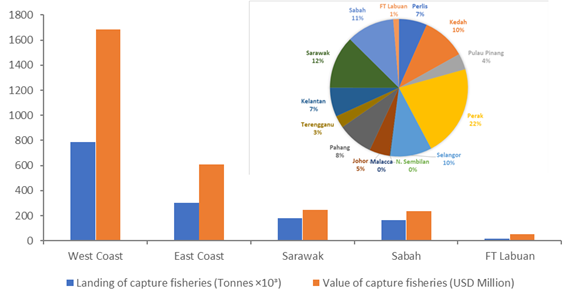 The ecosystem health and its ecological components including biodiversity, trophic levels, energy flow should be well protected to sustainably supply fish and fish products for the population. In 2014, it was common to see huge fish caught by artisanal fishermen from the Straits with large sea-grass beds and mangrove forest on its shores. Unfortunately, in the following year, the highly productive seagrass beds with rich biodiversity gave way to the economic development.

Fishes caught by a local fisher in a nearby sea-grass area. 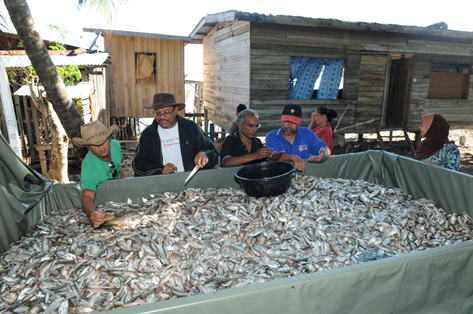 For Malaysia to be self-sufficient in fisheries, achieve its food security, reduce its import and increase its export, the production system has to be intact, healthy, highly productive, adequate and sustainable in order to improve the community livelihood and contribute to the economic development of the country, all driven by a sound governance and legal framework. Overharvesting, IUU (illegal, unreported and unregulated) fishing, pollution generating activities and habitat destruction such as sea-grass beds, mangroves and coral reefs should be prevented at all cost. It should be recognized that marine fisheries production depends on the environmental integrity, ecosystem health, biodiversity conservation and sustainable fish stocks. Finally, ecosystem-based approaches to responsible fisheries should be closely linked to the objectives of the national food security and human nutrition, which form the important building blocks of the blue economy.